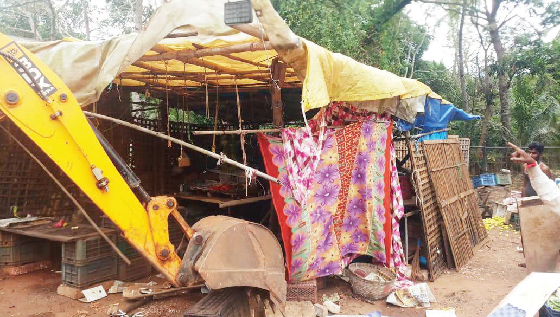 The Carmona village panchayat on Monday razed down a stall selling vegetables and fruits in the road widening area of the Major District Road.

The stall was demolished by the demolition squad, South upon a requisition made by the village panchayat.

Sarpanch Allwyn Jorge informed that the demolition was taken up after the notices issued by the panchayat fell on the deaf ear of the migrant running the stall.

He said the owner continued with his illegal business clandestinely even after the panchayat had issued notices in the local newspapers, asking the owners to clear the food carts and stalls along the road shoulders in the road widening area.

The demolition of the migrant stall comes ahead of the public meeting convened in the village to prepare an action plan on migrants.

âWe want to maintain our roads free of encroachments in the interest of road safety. No food carts or stalls alongside road shoulders will be allowed in the village,â Jorge said, while warning that the panchayat cannot be taken for granted by individuals to carry out illegal activities.