Home  >>  Goa  >>  AS THINGS APPEAR STUCK UP IN PLANNING PHASE... PLANS FOR ST XAVIERâS FEAST YET TO GAIN GROUND

AS THINGS APPEAR STUCK UP IN PLANNING PHASE... PLANS FOR ST XAVIERâS FEAST YET TO GAIN GROUND 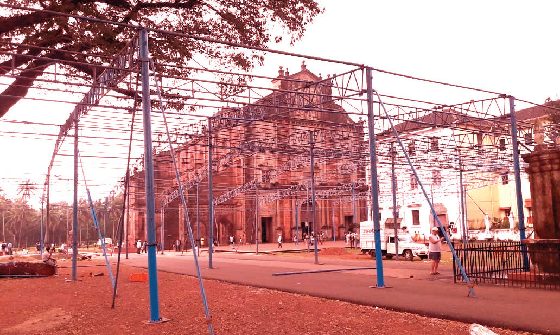 With fifteen days left for the commencement of the novenas and feast of St Francis Xavier at Old Goa, things appear to be stuck up only in the planning phase as not too much groundwork is visible on the ground apart from work on installation of the pandal.

However, Basilica Rector Fr Patricio Fernandes stated that he is used to the way the government authorities are functioning.

âThough things are not happening yet, I have learnt to take is easy as the government has its own way of functioning,â Fr Fernandes informed The Goan while stating that last year too everything fell into place in the last ten days.

âThis year more things are planned. For instance there will be two separate waste bins unlike last year when there was only one bin. So more bins will be installed. There will be improvement in the toilet and bathroom facilities as well with installation of more toilets and bathrooms,â the priest added.

Fr Fernandes also informed that initially he had meeting with the North Goa Collector wherein he submitted the requirements. âThen in mid-September a meeting was held with officials of the various departments. Later, another meeting was held at the ASI headquarters. From then, till now, from the government side things are happening but not yet materialized,â the Rector stated.    Meanwhile, the work on installing the structure for the pandal has begun. âThough installation of the pandal normally begins in October this year it was delayed due to rains and began only in November,â Fr Fernandes informed while adding that the height has been raised.

Asked about the backdrop for the main stage, the Rector said that it will be creative and work on the same is underway. The big screens, which were installed from last year, will become a regular feature now with more screens likely to be installed in other areas.

âWe are thinking of installing one screen in the area where people queue up while proceeding towards the relic. There is also a possibility of installing another screen for pilgrims staying at the back of the Basilica where religious programmes will be screened,â he added.

Meanwhile, Fr Fernandes also raised the issue of erratic electricity supply at the Basilica. âThere is a need for a dedicated transformer for the Basilica. Also, a generator as a backup in case there is a blackout,â he stated and pointed out that the water supply also needs to be improved to cater to the needs of the pilgrims as well as the tourists.

OLD GOA: The volunteers have been playing an important role in smooth functioning of the novenas and feast of St Francis Xavier, on a daily basis.
However, the volunteers have to be on their toes for a long stretch of time, sometimes without a breather.
So, to overcome the difficulty, the church is looking for more volunteers to lend a helping hand so that the volunteers get the much needed breaks.
âWe have asked the current volunteers to get more volunteers so that we can give breaks, otherwise it is exhausting,â Fr Fernandes informed but stated that he is looking for younger people.
âGenerally older retired people come who are not that active. But despite that they are doing a great job,â he stated.
âSome youngsters, including professionals, have shown interest, which is wonderful. We are giving them training on how things are to be done, to manage the queue, etc. Specialists are also giving them talks,â Fr Fernandes said and informed that in the years to come, it will become a professional setup, to be emulated by other parish churches.
Rector advocates need to have one entry and one exit point
OLD GOA : Concerned about the huge number of tourists thronging Old Goa, particularly the Basilica, Rector Fr Patricio Fernandes has advocated the need to have one entry point and one exit point to have better control over the crowd.
âThe ATS clamped on the multiple entry points at the Basilica due to bombings in Sri Lanka. But the entry point and the exit point remained the same which is not working. There is a need to have one entry point and one exit point,â Fr Fernandes added.
âThe crowd is simply coming in and going out. There is no detection or barricades, which poses a danger,â the priest stated.
âFor the moment, we have opened all entry points as it is simply not possible to control the crowds during the novenas with only one exit and entry point,â Fr Fernandes informed.
âThousands of people are coming in and going out within a short span of time during the novenas, with narrow gates, it is just not convenient,â he stated while opining that it is a miracle that it is happening without any stampede.
âThere is also a need to have a uniform landscaping around the Basilica complex,â he added and expressed concerns over the way works are being undertaken around the complex without application of mind.
âPeople are also complaining about that the footpaths being occupied by hawkers, which is a concern keeping in mind the safety of the people,â Fr Fernandes informed.
He also voiced concern over the absence of a dedicated corridor for the ambulance in case of emergency. âIn case of emergency, there is no dedicated corridor for the ambulance to come in. It takes nearly half an hour for the ambulance to arrive,â he stated while adding that he is in constant talks with the authorities concerned over all these issues in hope of improvements.   programme aims to deliver the Prime Ministerâs voice to the general masses of India. Since television connection is still not available everywhere fied three sites for relocation of offshore .
Choirs will be trainED in choral singing: Rector
OLD GOA : Stating that church singing is not the same as beat singing, Fr Patricio Fernandes stated that the choirs participating in the various novenas and feast masses will be trained in choral singing.
âThe church is trying to implement it so that the two are not mixed. The Charismatics brought beat singing in the church in 1960. With it, they brought another kind of praying which has slowly slipped into the church through Pota.    âThere is church singing, which is quite clear and devotional, and secular singing which is beat singing,â the priest pointed out.
âThere is solemnity in the singing and we should capture that and for that reason representatives of all the choirs will be meeting on November 17 wherein they will be given lessons on church singing,â Fr Fernandes informed while adding that around 180 people are expected to participate, with two representatives from each choir.
Feast theme: Ideas based on Pope and Archbishop
OLD GOA : Speaking on the most important aspect of the feast of St Francis Xavier, that is the theme, Fr Patricio Fernandes stated that theme is based on two ideas floated, one by the Pope and the other by the Archbishop.
âThe Archbishop in his pastoral letter said âGo and do likewiseâ as the Samaritan did. Pope Francis said âRooted in Christ we go out to bring the good newsâ. So we combined the two and came out with the theme âRooted in Christ, like St Francis, Go and do likewise,â Fr Fernandes informed while stating that we should allow Christ to do things through us.