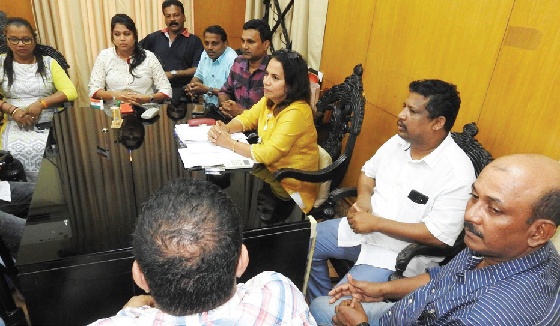 Rejecting all demands made by the BJP and Congress-backed councillors to rectify the resolution on Dr Jack de Sequeiraâs statue, Margao Municipal Council Chairperson Babita Prabhudesai instead preferred to put in her papers on Friday evening, asserting there will be no compromise on Dr Sequeira, Goem and Goenkarponn.

âAfter discussing with Goa Forward chief Vijai Sardesai and my colleague councillors on the demand made by the Opposition that I should either rectify the minutes of the resolution on  Dr Sequeiraâs statue or quit, I have preferred to resign from office instead of compromising on the Goa Forward stand on Goem, Goemkar and Goemkarponn,â Babita told a briefing on Friday evening.

Saying there would be no compromise on Dr Sequeiraâs resolution, Babita told the media in the presence of Goa Forward councillors that Dr Sequeiraâs statue will come up at the Ravindra Bhavan traffic circle after complying with the procedures.

She took potshots at the BJP and Congress for putting spokes in the installation of Dr Sequeiraâs statue, saying the two national parties have no sentiments on Goem and Goemkarponn. âI am surprised that Congress councillor Doris Texeira has raised the issue of Dr Sequieraâs statue when the Fatorda MLA Vijai Sardesai nor any of the councillors representing Fatorda had any objections to the statue in the constituency,â Babita asserted, while suspecting a conspiracy by the BJP and Congress group of councillors to sabotage the Dr Sequeiraâs statue project.

Reminding the media that Goa Forwardâs move to get Dr Sequeiraâs statue in the Goa Legislative Assembly had met with opposition, Babita said âOne should not forget that then Assembly Speaker Pramod Sawant is todayâs Chief Minister. So, if it could be denied there, Sawant now as the CM can deny the statue