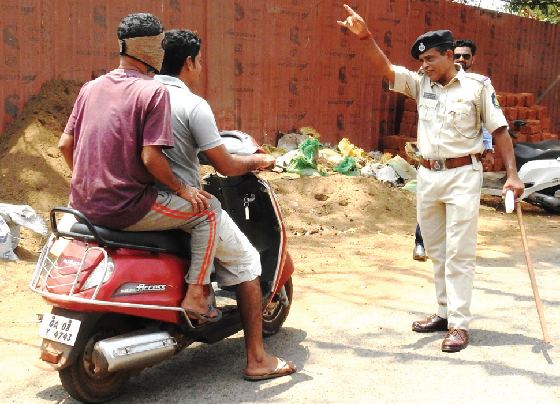 The men-in-uniform finally got down to business on Tuesday as they went about enforcing the lockdown in the commercial capital and parts of Salcete in both letter and spirit.

Nakabandis were set up at junctions and patrolling intensified throughout the commercial capital and the outskirts no sooner the 11 am relaxation deadline expired.

Margao police moved into the New Market and the Gandhi Market, while their Fatorda counterparts descended on the SGPDA market exactly at 11 am to ensure vendors shut down their shutters.

Margao Municipal market inspectors Hasina, Seema and Santo first descended on the New Market locked the gates. They then proceeded to the Gandhi Market and directed a couple of vendors who were unloading fruits to immediately stop the activity.

Grocery shop and sweet marts, which were opened since the wee hours of morning, to help customers make last-minute purchases, also downed their shutters by 11 am fearing action from the police and other authorities.

In fact, by 11.30 am, the busy streets wore a deserted look as the movement of men and vehicles thinned down, with police setting up nakabandis at the entry and exit points to the city.

Police pickets were set up at the Rawanfond junction, with police personnel questioning each and every rider and motorist. In neighbouring Fatorda, PI Kapil Nayak and his team were on the field to enforce the lockdown after 11.30 am.

At the Gogol Housing Board, police pickets were set up to stop the movement of people on two-wheelers and four-wheelers, with the men-in-uniform questioning the purpose of their presence on the roads.

By evening, life in the commercial capital came to an abrupt halt with the markets deserted and the residents indoors. Only the pharmacies, medical stores and petrol pumps were open.

While an odd vehicle was found plying on the road, petrol pumps reported poor business on Tuesday, with a pump owner fearing the worst in the coming days with the government ordering a complete lockdown from Wednesday.

Ban on fishing from Apr 2; vessel owners told to down anchor