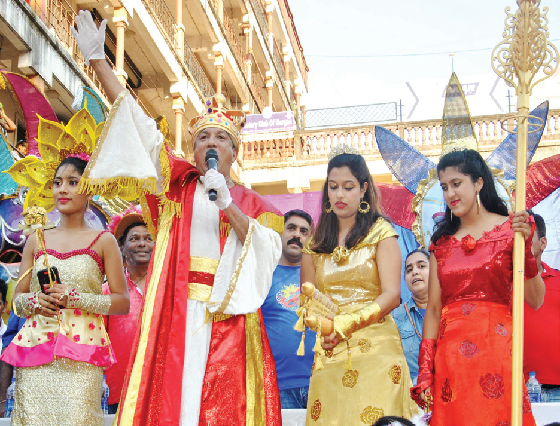 Deputy Chief Minister Manohar Ajgaonkar, who also holds the tourism portfolio, is believed to have put his foot down on the Margao carnival parade route, point blank telling officials there will be no compromise on the old Holy Spirit-Margao Municipal square route.

Ajgaonkarâs stand on the parade route came even as senior district administration and police officials reached unanimity that the Ravindra bhavan-Nehru stadium parade route is the most feasible route to hold parades and processions form the traffic and security point of view.

After arriving at a unanimous decision that there ought to be no change in the parade route from the Ravindra bhavan-Nehru stadium route on Wednesday evening, sources in the know told The Goan that district Collector Ajit Roy and senior police officials called on the deputy Chief Minister at his Margao residence, apparently to convince him that the Ravindra Bhavan route is the best route for the parades.

Ajgaonkar, however, is believed to have told the delegation of senior district and police officials that the carnival parade should be held at the old Holy Spirit-MMC square route.

Given that the deputy Chief Minister has insisted on the old route, the district Collector, South was scheduled to brief the Chief Secretary and if possible have a meeting with the Chief Minister.

Sources in the know informed that the stand of various official agencies is clear, that the Ravindra bhavan-Nehru stadium route is the best route to hold parades from the traffic and security point of view and the parade route should not return to the MMC square under any circumstances.

When The Goan called up deputy Chief Minister Ajgaonkar to shed light on his stand on the carnival parade route, he said the route selected by the Margao Carnival committee headed by Chairman Arthur DâSilva should be implemented.

âMy stand is clear that the Margao carnival committee chairman has decided to hold the carnival parade on the Holy Spirit-MMC square and this decision is final. If the authorities feel differently from the traffic point of view, the authorities should take measures to ease traffic congestion,â Ajgaonkar added.

Saying that the carnival and shigmo float parades are government-sponsored programmes, the tourism minister said the government spends huge amount of funds on these tourism promotion activities, adding that the such programmes should be held along routes which attract a large number of people and visitors.

A meeting of Magistrate and police officials could not take a decision on the Shiv Jayanti procession in the city on February 19, even as sources said the police and other officials have strongly batted for the Ravindra bhavan-Nehru stadium route for all religious and cultural processions and parades in

Sources informed that Sub-divisional Magistrate, Margao Vishal Kundaikar and DySPs, Serafino Dias, Prabodh Shirwaikar and other officials met in the district Collectorate, South on Thursday to take a call on the permission sought by the organizers of the Shiv Jayanti procession to take the procession through

While the officials are believed to have been unanimous in their opinion that no parades and processions should be held in the city, they have decided to take a decision only after discussing the matter with the district Collector, South Ajit Roy.