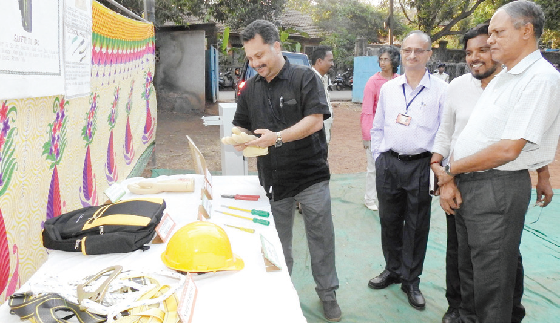 Power Minister Nilesh Cabral, on Thursday, said that the government will take up underground power cabling in towns and villages in the coming financial year with the Chief Minister Pramod Sawant making a budgetary provision of Rs 2500 crore for the department.

He also said the department has placed an order for 40,000 additional LED lamps to replace all streetlights and CLF lamps before the onset of monsoons.

Cabral further said that senior officers and staff, who did not get timely promotions will soon get the good news of promotions as the government will soon come up with a one-time relaxation in the number of years of service criteria.

Addressing power department employees at the Aquem Power house on Thursday after distributing safety kits to field staff, Cabral said a number of tenders will soon be floated to take the underground cabling of 11 and 3 KV lines in the towns and

âThe Chief Minister has made a budgetary provision of Rs 2500 crore in the budget estimates for the power department in the coming year, which will focus on the underground cabling,â he added.

On street light illumination, the Power Minister said around 1.70 lakh LED lights were installed across the state by the contractor, but hastened to add that the state government has now placed an order for additional 40,000 LED lamps to cover the entire state with LED street lighting.

He further said that the LED street lighting has still not reached many places in Canacona, Sanquelim, Valpoi and other places, adding that the department has taken a decision to replace all tube lights and CFL lamps with LED lamps.

To a question, Cabral said the department will soon install solar-powered control panels across the state to man the streetlights.

Saying that the power department is working hard to provide 24x7 power supply to the consumers, Cabral made a fervent plea to the people to cooperate and sacrifice in terms of land and space to set up transmission infrastructure in the state.

âPower comes to the state from outside. Unless people cooperate and make available their land and space to set up transformers and poles, the department will not be able to provide round the clock and quality supply to consumers,â he added.

MARGAO: The next time you come across a power linesmen complaining of shortage of power appliances such as testers, screw drivers et al, just dial Power Minister Nilesh Cabral with your  complaint.

For, the Power Minister on Thursday distributed safety kits to the department lines staff with a word of caution, saying the department will not take the responsibility if any field staff meets with any untoward incident for not wearing the safety items.

Thatâs not all. The Power Minister announced that the department has come out with a Reserve Stock List (RSL) policy wherein damaged safety kits can be replaced by the concerned linesmen after the same is verified by higher officials. âI have been working on providing safety kits to the field staff since they work by putting their lives in danger. Three young employees have passed away because of unfortunate incident, while many others had sustained injuries,â Cabral said. He, however, warned that the safety kits are not to be kept at home, adding that the water proof kit bags will come in handy when employees attend complaints during the monsoons.  The Power Minister said the department has also changed the policy of disposal of scrap lying at the divisions, while mulling centralizing auctioning of the scrap material.

âThe scrap has been just lying at the divisions without auction for years. We have now changed the policy. If there is any damage or fault to a transformer, it has to be brought to the division for replacement and the scrap will be auctioned,â he added.

Ban on fishing from Apr 2; vessel owners told to down anchor