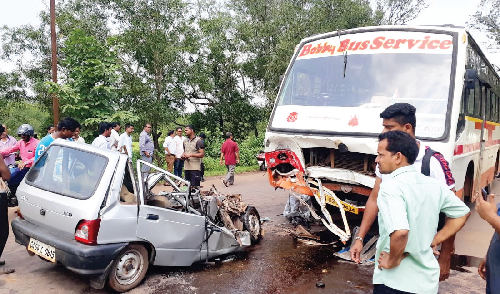 A 37-year-old woman from Surla-Bhole in Sankhali died on the spot when her car and an oncoming bus collided with each other along the Navelim-Surla road near the Ghodeshwar Devasthan at Navelim on Wednesday morning.

According to Bicholim police, the incident took place at about 10.15 am, when Navita Subodh Amonkar was proceeding from her residence towards her shop at Sankhali.

The impact was such that the front portion of the car was destroyed in the mishap.

Amonkar sustained grievous injuries and was rushed to Sankhali Primary Health Centre in a 108 ambulance, but was declared dead on arrival by doctors at the hospital.

Bicholim police conducted the panchanama under the guidance of PI Filomeno Costa and sent the body for an autopsy to the GMC hospital at Bambolim.