Home  >>  Goa  >>  Swachhata goes down the drain in toilet No. 108 on first floor of South Goa collectorate building

Swachhata goes down the drain in toilet No. 108 on first floor of South Goa collectorate building 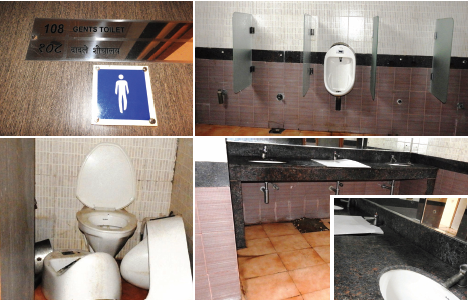 Welcome  to toilet No 108 in the imposing Matanhy Saldanha administrative  complex. This toilet block on the first floor of the Collectorate building is considered important in the scheme of things as  it is located adjoining the office of the Margao Sub-Divisional  Magistrate, which plays host to hundreds of litigants almost every day.

Sadly,  like many a toilet block in the building, Toilet No 108 on the first  floor is not anything better. A visit to the toilet revealed a worst  scenario and only raises questions over the state of sanitation in the  building when the government and officials swears by Swachhata and  cleanliness.

Strange it may seem, but true that the toilet block  plays host to a lone urinal, while the remaining urinals are all removed  and dumped in the toilet, blocking the use of the toilet.

The wash  basin is not anything better. While one of the wash basins has been  covered with a lid, the remaining taps lie in a damaged state, only  raising questions on the sanitation in the building.

Sources said the  office of the Sub-Divisional Magistrate, Margao, Uday Prabhudesai has  been flooded with complaints over the inadequate sanitation amenities on  the first floor. Sources, however, said the officials have expressed  their helplessness in addressing the issue, saying the entire building  has been hit by sanitation woes.

Litigants, however, have found  themselves in a piquant situation, either to stand in a queue to answer  natureâs call or look out for other toilet blocks in the Collectorate  building.

Incidentally, the district Collectoare has been headed by a  host of Collectors, including IAS officials, but the issue of toilets  and sanitation remained unresolved till date.

Hopes were raised when  Revenue Minister Jennifer Monserrate visited the district Collectorate  and promised to bring about a turn around in the sanitation problem, but  in vain.