Dilapidated roads: PWD, govt to be held accountable for deficiency in service 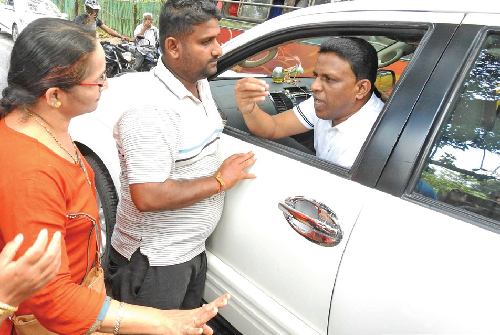 Public Works  Department officials, beware. It is the right of the consumers to get  potholed-free road and can very well take the PWD or the government to  task for deficiency in service.

In fact, the Sub-Committee on Road  Safety of South Goa District Consumer Protection Council has on Tuesday  resolved to assist and guide the consumers how to go about lodging their  complaints before the Consumer Conciliation Committee and also help  them knock the doors of the Consumer courts to redress their grievances.

The  sub-committee has further resolved to document the potholes on some of  the roads, whether the potholes are filled up properly since the Amended  Consumer Protection Act has made stringent provisions for deficiency in service. âItâs the right of the consumers to get potholed-free roads.  When we talk about road safety, the word road comes first. And, when  thereâs no road at all, there cannot be safety,â remarked Roland  Martins, while briefing the media on the outcome of the meeting on  Sub-Committee on Road Safety of South Goa District Protection Council  here on Tuesday.

Saying that courts in neighbouring Maharashtra has  passed orders on deficiency in services vis-Ã -vis roads, Martins said  the sub-committee will assist the people intending to take the PWD to  the Consumer courts for relief.

Saying that potholes have affected  everyone, right from the motorists, riders to the pedestrians, Martins  said the sub-committee will document the potholes in particular roads.  âWe are going for a detailed exercise since the Consumer Protection Act  has been amended, by including stringent measures on the question of  deficiency in service.

At the same time, Roland said the  sub-committee has underscored the need to analyse the reasons behind the  accidents in South Goa so that recommendations can be made to the  government for redressal. âAfter an accident, the police comes out with  some finding, which needs to be analysed how to avoid these accidents in  the future so that it leaves a lesson or two for the PWD, riders and the  bus drivers,â he added.

Blaming the PWD for total negligence on the  question of road safety, he said the sub-committee will use the Consumer  Protection Act to file cases for deficiency in service as the Motor  Vehicle Act does not have any provision to take the PWD to task for bad  roads.

To a question, he said the sub-committee will compile a report  on the points raised by the members and place the same before the  district Consumer Protection Council.

On the  implementation of the new fines notified by the government under the MV  Act, Martins said the sub-committee will take up awareness amongst the  motorists on the revised fees during the road safety week, beginning  from September 17.  While appreciating the decision of

the Transport  Minister Mauvin Godinho to enforce the new fines after January 1,  Martins reminded that there cannot be road safety if the road itself is  bad.

Citizens stop repair of damaged Rawanfond road with cold tar
MARGAO: Simmering discontentment  amongst the people over the potholed roads burst out in the open on  Tuesday when a group of youngsters stopped the PWD from repairing the  damaged Rawanfond road with cold tar demanding hot-mixing of the damaged  road.
The youth led by Vinayak Volvoikar stopped the work on two  counts, one that the work was being carried out in the evening,  resulting in a huge traffic jam and to protest against what they called  as the sub-standard work.
After the PWD lifted away the black metal  from the road, Volvoikar said the PWD had repaired the road around a  fortnight ago with cold tar, only to be washed away again. âWhat is the  use of the tar when it cannot give relief to the people even for 15  days,â Volvoikar demanded to know, saying the exercise will only end in  futility like before.
He demanded that both Leader of the Opposition  Digambar Kamat, representing Margao and Navelim MLA Luizinho Faleiro  should have pressed the government to take up the road repairs work on a  war footing, but in vain. âThe cold tar has failed to serve any  purpose. If the cold tar could not serve any purpose in the last 15  days, it will certainly not provide any relief in the future as well,â  he said.
The youth were also incensed over the fact that the  contractor took up the work during the peak hours, resulting in a  traffic jam. They also demanded to know why not a single PWD official  was present at the site to supervise the quality of work.
Dicarpale locals protest over
bad condition of road
MARGAO: Incensed over the fact that the potholed road that is being used almost  every day by a Deputy Chief Minister, as many as two Ministers and an  MLA, residents of Dicarpale, on the outskirts of Margao, took to the  streets on Tuesday to protest over the bad condition of the road.
The  protesters had vowed not to lift their blockade till the two deputy  Chief Ministers Deepak Pauskar and Chandrakant Babu Kavlekar, Power  Minister Nilesh Cabral and local MLA and Minister Filipe Neri Rodrigues  hand out an assurance over the restoration of the road. Cuncolim MLA  Clafacio Dias, who was passing by the road around the same time, later  promised to get the road done within 10 days, which finally prompted the  protesters to withdraw their stir.
A local resident Poonam  Prabhugaonkar said the people have come on the road to highlight their  plight as well as the indifference of the powers that be, including the  deputy Chief Ministers and Ministers using the road daily. She pointed  out that they decided to come down on the road after local MLA and WRD  Minister Filipe Neri Rodrigues nor the PWD engineers responded to their  calls on the road repairs.
âThe road near the Lakakhi laundry and  along the military camp is unmotorable. And, the authorities have done  nothing to repair the road which has been washed away in the rains,â  Poonam said.
Truck owner Franky Gomes and some truck owners, who  supported the stir, said people are even ready to pay the hefty traffic  fines, but the roads should be traffic worthy. âThe authorities have  increased the fines for traffic violations, but let the government first  provide good and potholed-free roads,â he said.
The Cuncolim MLA, who  was stopped by the protesters, said road repairs have failed to provide  solace and mitigate the hardships of the motorists and pedestrians  because of the continuous downpour. While sympathising with the  sentiments expressed by the protesters, Clafacio assured them to get the  road repaired in the next 10 days.