Loose gravel on road near MMC square a killer 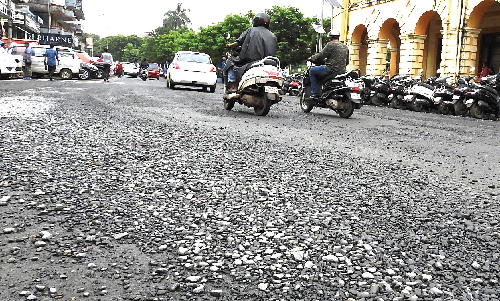 With the district authorities and the PWD, National Highways, turning a blind eye to the plight of motorists, beleaguered two-wheeler riders have a simple plea for the authorities â please do a favour by at least lifting away the loose black metal scattered all round the damaged roads and save them from accidents.

Even as the National Highway officials say they are in the process of directing the contractor to repair the damaged road around the Margao Municipal Council square, motorists complained that more than the potholes, they face danger from loose black metal that has surfaced on top.

Two-wheelers skidding on the road, which has been washed away by the torrential rains, is literally the order of the day, but neither the PWD nor any other agency has deemed proper to intervene and get the loose black metal lifted away.

âLet the authorities take their own sweet time to direct the contractor to repair the road or float a new tender. But, at least, let the PWD or any other agency engage labourers to lift away the loose black metal strewn on the damaged roads,â remarked a motorist.

When The Goan contacted a PWD, National Highway, official to shed light on the state of the road around the MMC square, Executive Engineer Laxmikant Naik said his office will ask the contractor to take action by repairing the road.

He recalled that the contractor had repaired the damaged stretch of the road near the Old Collectorate building last year, but it is now washed away at other places.

Naik said his office has brought the situation to the notice of the Principal Chief Engineer, adding that the road repairing work will start after the current wet spell ends.

Meanwhile, the Shadow Council of Margao on Tuesday submitted a memorandum to the District Collector, Ajit Roy, complaining against the PWD engineers and the Contractors for constructing substandard roads within the jurisdiction of Margao municipal area and putting the life of the general public at risk.

Led by former MMC Chairperson Savio Coutinho, the delegation submitted that the condition of the public roads within the Margao municipal area is in such bad condition that it has become difficult for commuters to use the same.

âAt some places the roads are full of potholes and in some other areas the existence of the road itself is invisible. Thus, there is absolute danger to life and property of the general public who

are using the said public roads,â the memorandum added.

Coutinho pointed out that the public roads which are laid with hot-mix carpet were supposed to last for a period of three years as per the condition laid down in the tender. However, the said public roads have deteriorated within a period of six months and using the same has become absolutely risky, while demanding action against the contractors and the PWD engineers.

The delegation also drew attention of the District Collector to an order passed by the District Magistrate of Kozhikode dated 06/08/2019 whereby an order has been passed for the arrest of engineer concerned fixing responsibility for bad roads, while hoping for similar action before any fatal accident occurs.

The Collector later told the media that his office will inform the PWD to take measures towards the repair of the damaged roads and restore these in good shape.