Home  >>  Goa  >>  IT Park: Protest march in Chimbel against destruction of forest cover 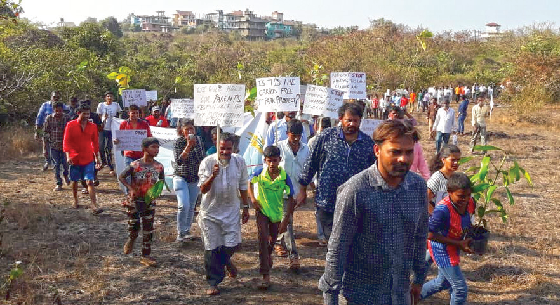 Slogans against the proposed IT Park and the IT minister rented the air as hundreds of villagers marched to the Chimbel lake in a bid to highlight the destruction of the forest cover by vested interests.

The awareness march started at around 4 pm on Sunday and various activists from other parts of Goa participated to voice their solidarity with the Chimbel locals who are fighting a valiant battle against the IT Park which they say would not only spell doom to the forest cover but also to the century old Chimbel lake which lies in close vicinity of the land where the IT Park is planned. The villagers were armed with placards as well as saplings.

On reaching the lake, speakers lambasted the government for its dictatorial attitude in going ahead with the project despite opposition from the villagers.

Aquem Baixo sarpanch Siddesh Bhagat compared the politicians to Ravanas who are out to disrobe the motherland of its greenery. âThey simply cannot tolerate green colour and are mercilessly destroying fields and hills for their personal benefits,â Bhagat stated while opining that only the people can save Goa by coming together and opposing such destructive plans like that in Chimbel.

âThe more they destroy trees the more we should plant trees,â he informed and said that we will fight with Gandhigiri while at the same time stating that if things go out of hand the people wonât hesitate to strike back.

Walter Lobo from Calangute stated that all MLAs want to destroy land in Goa. âThe IT Park is nothing but another form of real estate which will lead to the destruction of the lake,â he said.

Lambasting IT minister Rohan Khaunte, Rudolf Fernandes asked why trees were cut to pave way for a road so far away from where the IT Park is planned. âThis only shows that the real intention is to provide an access road to a neighbouring property where a huge project is planned,â he added.

Wilbur Ticlo urged the people to save Communidade land from politicians who are out to grab it, while Arturo DâSouza said that the entire village should continue their fight to save the forest and the lake for future generations.

Lawrence DâSilva from Cansaulim said that it is the love for motherland that has brought him here. âSadly the politicians have forgotten this love,â DâSilva decried while stating that the people will take the fight ahead to save mother nature.

Activists Rama Kankonkar of Curca, Avertini Miranda of Goa Green Brigade, members of Chimbel and Merces manch and others participated in the march.

Later the villagers planted saplings along the path where trees were cut to pave way for a road.

Old Goa : Merces Manch Welfare Association (MMWA) has extended support to the Chimbel locals in its fight against the proposed IT Park project.

Confirming this, MMWA president Sudesh Kalangutkar said that their support will be always with the Chimbel locals till the project is scrapped. âIf need be, we will assist the Chimbel manch is fighting the issue legally,â he added.

Kalangutkar further lambasted Merces panch Prakash Naik for extending support to the IT Park without taking the gram sabha into consideration. âWhat authority does he have to speak on behalf of Merces villagers,â Kalangutkar questioned and added that they will take up the issue at the upcoming gram sabha. âThe panchas do not have right to speak for the village without taking the people into confidence,â he opined.