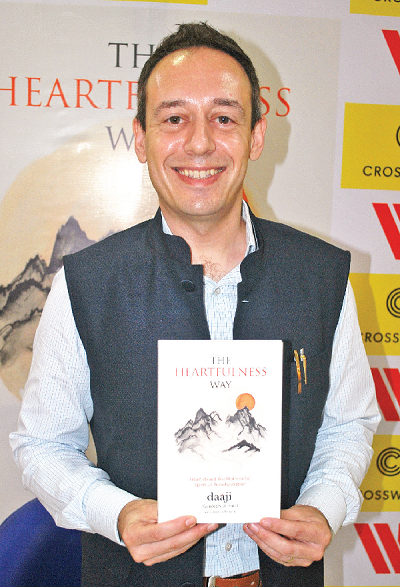 Quite a few years ago, Joshua Pollock began trying out meditation in his search for contentment in life.

âI used to read a lot of books about spirituality and meditation. I read about all these great personalities in the past and about the high states of being. But no book could ever tell me how to achieve this on my own,â he admits.

Pollock then decided to experiment with some meditation techniques expecting big results only to be disappointed when he noted no change in himself. It was at this point that someone suggested that he try heartfulness meditation.

âI wasnât expecting much but still I decided to give it a try. And I was left flabbergasted by the result because it went way beyond my expectations. I didnât know that meditation could do that actually,â he says.

Pollock admits that he began to see that this was taking him somewhere even if he didnât know the end goal. âUp until then the other meditation techniques that I had tried had left me stretching my abilities but this form felt like it was meant for ordinary people. Itâs not that I have anything against other practices after all I havenât tried all of them,â he clarfies. And along the way his life underwent a transformation.

âIt gave me more illumination and more clarity. I could listen to my inner voice and follow it without being clouded by desires or swayed by the world around. Your learn to follow your inner guidance and to refer to your heart again and again,â he says.

Pollock adds that often this change you undergo isnât always obvious to you and you donât realise it until someone points it out to you.

âI used to be very restless and couldnât find meaning in anything I did. But the restlessness hasnât gone away. But instead of being restless for external things and disappointed when I didnât get it, now the restless is more for spiritual things and something higher.

Pollock has been practicing this meditation technique for the last 15 years and it was two years ago that his mentor Kamlesh D. Patel, widely known as Daaji, the fourth global guide of Heartfulness asked him to write a book about it.

âIt felt strange for me to be writing this book when he was there,â admits Pollock but he agreed anyway.

âI began asking him questions about what to put in the book and this dialogue between us eventually became the book. Here we talk about the principles and process of meditation, what spirituality is and the relevance to our lives,â he says.

Pollock states that even if someone doesnât have much background in the topic or experience in it can grasp it. âMeditation has always had a lot of mystery surrounding it. In our second chaper we try to demystify it. Infact one of the gurus in the lineage once mentioned that God is simple, so he way to reach God must also be simple. So the techniques of heartfuness are very simple too,â he says.

Pollock also clarifies that meditation has nothing to do with religion.

âYou donât have to leave your lifestyle, your religion, culture or traditions to practice this. Heartfulness meditation is like dietary supplements. It is something that you add to your life and the effect is enormous,â he says.

Making of a hero

The best of both worlds

The most awaited music festival of the year âMonte Music Festivalâ will begin on February 1 at the Chapel of Our Lady of the Mount, Old Goa Read more